Unfortunately, I am currently too short on time to prepare weekly Nature Almanac posts. However, since there is so much consistency with natural happenings during any given week between years (especially this time of year), I am republishing the following 2018 post for folks trying to stay abreast of all that is going on outdoors at this time. 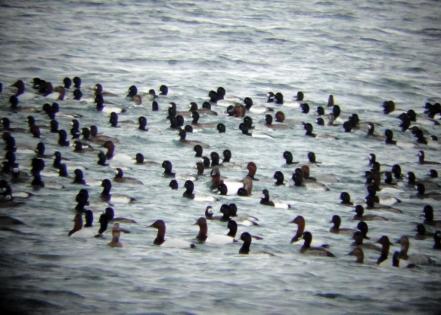 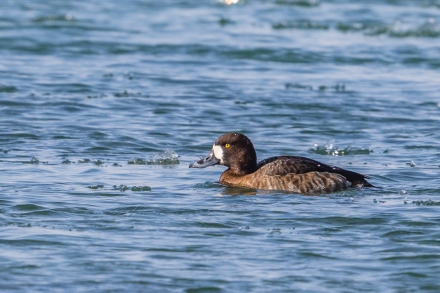 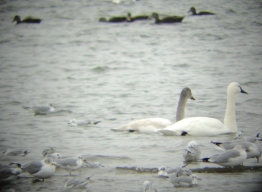 Tundra swans with a variety of ducks and Bonaparte’s gulls (photo by Jacquie Walters, NYSDEC) 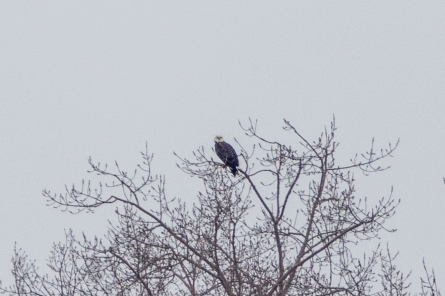 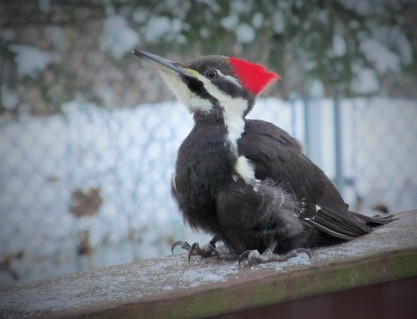 A little-known natural phenomenon associated with the Buffalo-Niagara Region is the tremendous concentration of ducks that overwinter on the Great Lakes and Niagara River. In fact, our Region serves as one of the most important water­fowl wintering areas in the northeastern United States, especially for diving ducks. Already, early in December, thousands of diving ducks (e.g., canvasback, scaup, common goldeneye, common merganser) and over 300 tundra swans have arrived here from Canada and Midwest Prairie Potholes. Most will spend the winter in our Region. Their ranks will swell to tens-of-thousands later this month, as the majority of wintering ducks typically arrives during December. Total numbers may exceed 100,000 ducks in January and February. For example, a February 2, 2017 winter waterfowl survey from shoreline observation points conducted by the New York State Department of Environmental Conservation (NYSDEC) documented the presence of >110,000 ducks along the Buffalo Waterfront and Upper Niagara River.

Waterfowl are attracted to the Great Lakes and Niagara River during winter months by the extensive areas of open water (i.e., unfrozen) and abundant food resources, both plant and animal. The following species feed mostly on aquatic plants such as eel-grass: canvasback, redhead, and tundra swan. Crustaceans such as crayfish are the primary prey of common goldeneye and long-tailed duck. The following species feed mostly on mollusks such as mussels and aquatic snails: greater and lesser scaup, bufflehead, and white-winged scoter. Common and red-breasted mergansers feed primarily on fish.

The Buffalo Waterfront (both inside and outside the breakwalls) typically supports large and compact rafts (i.e., flocks of ducks floating together) of diving ducks, especially early in the winter before Lake Erie freezes. Rafts of thousands (sometimes tens-of-thousands) of greater scaup, lesser scaup, canvasback, redhead, common goldeneye, bufflehead, and common merganser have been recorded there. Such rafts can often be observed from public viewing areas such as Gallagher Beach State Park, Buffalo Harbor State Park, Erie Basin Marina, and LaSalle Park.

Extensive areas of open water attract large rafts of ducks to the Niagara River throughout the winter, especially when ice forms on Lake Erie and (occasionally) Lake Ontario. Assuming Lake Erie will freeze this winter, as it usually does, large numbers of ducks will move from there to the open waters of the Niagara River creating even more impressive concentrations. The critical open water and food resources provided by the Niagara River for overwintering waterfowl and other waterbirds is a significant reason why the River is listed as an Important Bird Area by the National Audubon Society.

It is well worth a winter visit to Goat Island (within Niagara Falls State Park) to view a particularly amazing feat performed daily by common goldeneye. Scan the rapids above Niagara Falls and you will see individual goldeneye maneuver the rapids, both on and below the water surface, as they forage for crayfish and other prey. How they avoid being dashed against the rocks in those turbulent waters is a wonder! They often come to the surface right above the brink of the falls just to fly back upstream to repeat the performance.

The Lewiston Reservoir, which typically freezes by early to mid-January, occasionally serves an important migratory feeding and resting area in late fall and early winter for greater and lesser scaup, as well as canvasback. Rafts of >5,000 scaup and >2,000 canvasback have been recorded there. Viewing areas are limited mostly to Reservoir State Park.

Lake Ontario does not freeze in a typical winter, although shore ice may extend well out into the lake (i.e., 0.5 mile or more) during the dead of winter. Large numbers (hundreds and sometimes >1,000) of the following species can be observed from shoreline overlooks: common goldeneye, white-winged scoter, long-tailed duck, common merganser, and red-breasted merganser. Occasional common loons, red-throated loons, and red-necked grebes may also be seen. It is noteworthy that very large rafts of long-tailed ducks and white-winged scoters often occur well offshore in Lake Ontario, out of sight and beyond NYSDEC survey limits. In addition to scoping out rafts of ducks at various waterfowl concentration areas, some birders choose a good overlook along the Lake Ontario shore (e.g., Wilson-Tuscarora State Park, Wilson Public Pier, Krull Park, and Golden Hill State Park) to observe flights of waterfowl and other waterbirds traveling east and west, close to shore, over an hour or more. Remarkable numbers of the birds listed above can be observed in this manner.

Extensive open water and an abundance of prey attracts other birds to the Great Lakes and Niagara River. Snowy owls frequently feed on ducks and other waterbirds concentrated close to shore. Bald eagles do the same, and also hunt and scavenge fish where open water is found. A few great blue herons and belted kingfishers, two species that mostly leave our Region in winter, can often be found foraging for fish and other prey in these productive habitats. Considering this abundance and diversity of birdlife, open water areas of the Great Lakes and Niagara River can be exciting places to visit during winter months.

Below are highlights of what you can expect to find outdoors in the Buffalo-Niagara Region this week. Those in bold/italics are new or substantially revised highlights to watch for this week. Check out the list of 300 publicly accessible sites at https://bnnatureblog.com/nature-sites/site-lists/alphabetical-list/ to find areas to explore in your neighborhood and throughout the Buffalo-Niagara Region.

Be sure to find an opportunity to get outside this week to discover signs of the season.