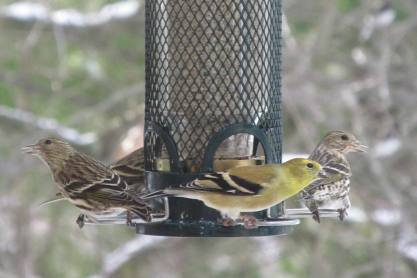 This first week of spring is forecast to be mostly below average in temperature in the Buffalo-Niagara Region, so the drab landscape with residual snow cover in some areas won’t change substantially. Lake Erie as well as inland ponds and wetlands remain mostly ice-covered, so the flood of northbound ducks and geese that typically stop-over in the Buffalo-Niagara region this time of year will continue to just trickle in. Regardless, the region continues to support an abundance and diversity of life that can be observed by anyone eager to get outdoors. Most winter resident birds are still present, including thousands of diving ducks (e.g., common merganser, common goldeneye, scaup, and long-tailed duck) that spend the winter in open water areas such as the Niagara River. The next few weeks are an especially good time to observe these ducks as many are performing intriguing courtship displays and vocalizations. Winter raptors (e.g., snowy owl, short-eared owl, rough-legged hawk) are still present in the region, especially in areas with extensive grassland habitats. Typical winter songbirds such as the dark-eyed junco and American tree sparrows plus less common species such as the pine siskin and common redpoll continue to visit local bird feeders.

Moreover, signs of spring are evident across the region. In fact, subtle signs of spring have been visible for several weeks. Tree sap began to flow a couple weeks ago when daytime temperatures finally reached above freezing, as evidenced by maple sugaring operations in our region. Red and silver maple flower buds are swollen, and a few pussy willows have broken bud. The initial stages of breeding have begun for some species of fish, as they migrate toward spawning areas. Relatively small flocks of Canada geese and tundra swans have been migrating northward across the region, and pairs of geese are returning to previously used nesting sites (standing on ice-covered ponds in some cases). Puddle ducks such as the northern pintail, wood duck, and American wigeon have been seen in the limited areas of open water outside the Niagara River. Spring flights of hawks, bald eagles, and turkey vultures have been recorded along the Lake Erie and Lake Ontario shorelines during the past few weeks. Great horned owls have been on-nest for a few weeks or more. Other raptors, including bald eagles and red-tailed hawks, have recently started nesting. A few early migrant shorebirds and songbirds (e.g., killdeer, American robin, red-winged blackbird, common grackle) have arrived in the region. Songbirds have initiated their pre-nuptial molt (most evident in male American goldfinches visiting feeders), and several year-round resident species have been singing and establishing territories since early to mid-February. Eastern chipmunks have emerged from their winter dens to feed and breed. Most large mammals bred during the fall or winter, so we can expect to see fawns, pups, and kits over the next several weeks.

Woodland Wildflowers:
• Skunk cabbage buds, which developed last autumn, will slowly advance toward a peak blooming period in the next two or three weeks.

Trees and Shrubs:
• Sugar maple sap (as well as sap in other tree species) will continue to flow, especially during relatively warm days following nights with sub-freezing temperatures.
• Red and silver maple flower buds will continue to swell but will not flower substantially during the coming week.
• Although a few pussy willows have broken bud, peak flowering is still over a week away.
• If you are impatient to see flowering trees and shrubs, try “forcing” branches to bloom by placing 12 to 18-inch cuttings (make sure each has flower buds) in a vase of water indoors. Flowers will appear after several days. Recommended species include red maple, silver maple, box-elder, pussy willow, and eastern hop-hornbeam. The following non-native species may also be “forced”: forsythia, lilac, and apple.

Insects & Other Terrestrial Invertebrates:
• Early spring species of caddis flies, stoneflies, and gnats will continue to be active when air temperatures are about 40°F and warmer.
• Over-wintering species such as the wooly bear caterpillar and mourning cloak butterfly will remain inactive until normal temperatures return.

Fish:
• Most species of fish will remain relatively sedentary as water temperatures in most lakes, ponds, rivers, and streams hover at or just above freezing.
• Northern pike will begin to concentrate near tributary streams, ditches, and shoreline wetlands in preparation for spawning, which will start shortly after ice disappears (when the water temperature exceeds about 40°F).
• Steelhead that migrated from Lakes Erie and Ontario into tributary streams last fall and through the winter are now joined by fresh steelhead entering the tributaries in preparation for spring spawning (when the water temperature approaches 50°F). Steelhead are an anadromous form of rainbow trout that spawn in streams but live most of their lives in Lakes Erie and Ontario. All forms of rainbow trout were introduced to the region (they are native to Pacific coast watersheds).
• Stream-dwelling rainbow trout may spawn at a similar time as steelhead.
• The DEC will continue to stock local streams with hatchery-raised brown trout and rainbow trout in preparation for the opening of trout season on April 1.

Water & Shore Birds, Gulls & Terns:
• Thousands of diving ducks will remain in their wintering areas, primarily open water areas of the Niagara River and Lake Ontario. The primary species include common merganser, red-breasted merganser, common goldeneye, bufflehead, canvasback, scaup, and long-tailed duck. Many will be performing courtship displays and vocalizations.
• Red-throated loons, red-necked grebes, and horned grebes will continue to use open water areas as stop-over feeding areas along their migration route north. See the “Great Lakes/Niagara River” column in the “B-N Region & Sites” tab on this web page for sites that provide public access.
• Spring migrant puddle ducks and geese will continue to trickle into the region but the flood of migrants will not occur until inland ponds and wetlands are mostly ice-free.
• Puddle ducks such as the northern pintail, American wigeon, mallard, American black, gadwall, redhead, ring-necked duck, and wood duck will continue move into the region, seeking out scarce open water areas.
• Pairs of Canada geese will continue to return to previously used nesting sites (standing on ice-covered ponds in some cases).
• Great blue herons will continue to gather on Motor Island in the Niagara River to nest, whereas they are just returning in small numbers to inland areas.
• Some winter gulls, such as the glaucous, Iceland, and great black-backed gull may remain in the region over the coming week or two.
• Bonaparte’s gulls will continue to trickle into the region, using the Niagara River as a significant stop-over feeding area along their migration route north. This species will reach its peak spring numbers in the region in mid-April when thousands will be present along the Niagara River.
• To stay abreast of bird sightings in the region, consult eBird, Genesee Birds, and Dial-a-Bird (see the “Resources” tab on this web page for more details).

Birds of Prey:
• Some winter resident raptors (e.g., snowy owl, short-eared owl, rough-legged hawk, northern harrier) will continue to linger in the region, especially in areas with extensive open grassland habitat.
• Spring flights of hawks, bald eagles, and turkey vultures will continue to follow the Lake Erie and Lake Ontario shores as they migrate north.
• Northbound long-eared owls and northern saw-whet owls will begin to arrive in the region, most notably near the southern shores of Lake Erie and (especially) Lake Ontario.
• Year-round resident species such as the great horned owl, barred owl, eastern screech owl, bald eagle, peregrine falcon, and red-tailed hawk are paired up and many are already on-nest. Some great horned owl nests may have chicks already.

Upland Game Birds:
• Wild turkeys will continue to travel and feed in flocks as winter-like weather continues.
• Male ring-necked pheasants that have become naturalized in the region will continue their rooster-like crowing to establish territories and attract mates.

Songbirds:
• Typical winter songbirds such as the dark-eyed junco and American tree sparrow plus less common species such as the pine siskin and common redpoll will continue to visit local bird feeders.
• Bird feeders will also be active with year-round resident birds such as mourning dove, downy woodpecker, hairy woodpecker, red-bellied woodpecker, black-capped chickadee, tufted titmouse, white-breasted nuthatch, blue jay, northern cardinal, house finch, and American goldfinch.
• If you don’t have a feeder of your own, consider visiting a local nature education center (see the last column of the site lists under the “B-N Region & Sites” tab on this web page).
• A few snow buntings and Lapland longspurs may still be found in open farmland, although most of the large flocks of snow buntings that wintered in our region have migrated north out of the region already.
• Local horned larks are establishing territories and some may be incubating eggs already, while migrant horned larks continue to pass through the region.
• Several species of songbirds have been singing and establishing territories since mid-February and will continue to do so over the coming week. Included are mourning dove, black-capped chickadee, tufted titmouse, white-breasted nuthatch, Carolina wren, blue jay, northern cardinal, and house finch. Also included are downy, hairy, red-bellied, and pileated woodpeckers that use drumming as well as vocalizations.
• A few early migrant shorebirds and songbirds (e.g., killdeer, American woodcock, northern flicker, eastern bluebird, American robin, eastern meadowlark, horned lark, red-winged blackbird, common grackle, and brown-headed cowbird) will continue to trickle into the region.

Mammals:
• True hibernators (several species of bats, woodchuck, meadow jumping mouse, and woodland jumping mouse) will continue to be mostly inactive in the region during the coming week.
• Striped skunks emerged from winter dormancy following the thaw that started a couple weeks ago, and they will remain mostly active in the coming week. This is their breeding season.
• Opossum and raccoon, which became significantly more active following the thaw, will continue to be active (other than during any extremely cold periods).
• Eastern chipmunks will be actively feeding and breeding (other than during any extremely cold periods).
• Most large mammals bred during the fall or winter, so we can expect to see fawns, pups, and kits over the next several weeks.
• White-tailed deer continue to travel in herds. Finding food will continue to be difficult until the growing season begins.

Find an opportunity to get outside this week to discover signs of spring.