Unfortunately, I have not had time to prepare weekly Nature Almanac posts for a few months now and the trend is likely to continue another few months – my apologies. Since there is so much consistency with natural happenings during any given week between years (especially this time of year), I decided to start republishing my 2018 posts for folks trying to stay abreast of all that is going on outdoors. 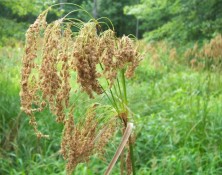 Wool-grass (a type of bulrush) 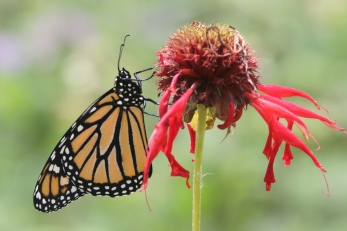 Oblong-winged Katydid (can you spot it?)

Late summer is a season of abundance for wildlife of the Buffalo-Niagara Region. The availability of hard mast (acorns, beech nuts, hickory nuts, black walnuts) and soft mast (fleshy fruits of black cherry, elderberry, dogwoods, etc.) typically peaks at about this time. In addition, goldenrod and aster nectar and pollen rapidly become an important food source for native pollinator species of insects. Invertebrate and vertebrate animals are plentiful, providing an abundant prey base for predators. Still, many birds, bats, and some insects are already leaving the region to fly south for the winter and countless migrants from Canada pass through our region. This season of abundance and transition supports excellent nature viewing opportunities so get outdoors this week to take full advantage.

Be sure to find an opportunity to get outside this week to discover signs of the season.